For over a decade I’ve carried a heavy shoe box full of tubs of pennies from house to house. These were not my pennies, but my grandfathers that he had collected year after year.  In his top dresser drawer he kept an empty margarine tub, Fleishman’s soft, and at the end of every day he would empty his pockets.  I have no idea how long he collected these pennies and I’m not sure why either. I seem to remember it had something to do with us grand kids, maybe for a starter college fund, maybe just for fun.

The day finally came where I knew I needed to do something about the pennies. After living on backs of shelves and under beds and in other forgotten corners for years it was time for them to go. Just turning them in to the bank seemed wrong, these pennies represented years of collecting. They deserved more than that. To me they represent far more than material worth, there are memories locked in there.

Part of me wants to keep the pennies because they hold many of those memories of spending time with my grandfather.  Memories like the process of making popcorn with his air popper, using the heat to melt a huge chunk of butter on top, then pouring it all into a 5 gallon ice cream tub and putting the lid on and shaking it until the seeds all bounced toward the lip so they could be removed. I love buttered popcorn to this day.

Grandpa was a solid man, tall and proud.  If there was a project he wanted to finish or a skill he wanted to learn, he went out and invested his time and money to learn about it.  He was a photographer, a horse man, a book binder, a wood-carver, and probably much more beyond what I ever saw. I wasn’t around when he was pursuing many of his hobbies, in fact I don’t remember much about his hobbies than what my brother and I found in his basement when we came over for Sunday dinners and the adults wanted to talk.

There were the trophies for his horses and other animals, there were the books, he had a dark room – which for me and my brother was the coolest thing ever.  Deep in the unfinished part of the basement were the wood working tools and carefully labeled boxes of supplies. And then there were the pennies which he kept on the upper shelf of a closet.  Each time he would fill a margarine tub he’d tape it shut and put it with the rest.

Every day for the past few weeks I’ve spent time sorting through the pennies and separating the wheat pennies from those with the Lincoln memorial. The heavy shoe box is gone now, and so are the brittle and cracked tubs of Fleishman’s. Of the pennies only a small box remains of all the special ones, the wheat pennies, the all nickel ones, the ones that he had set aside in a yellowed envelope.  Those I will keep, if anything to relive the memories that I have. 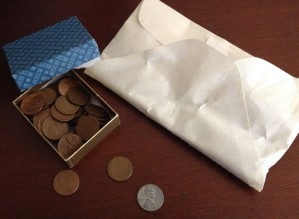