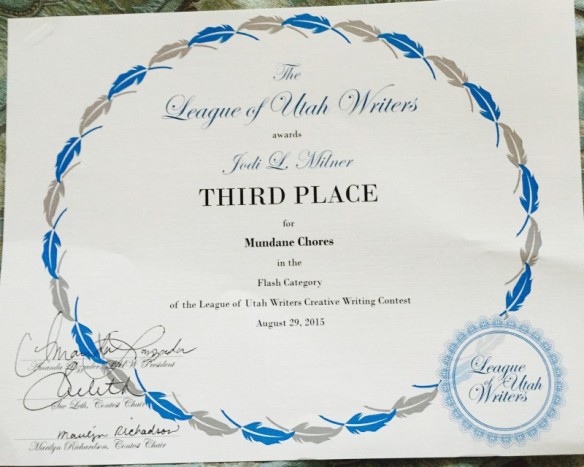 I almost forgot – In all the hustle and bustle of the last few weeks I won a prize! Yay! Someone out there actually likes my work, and it’s not my mother (although she likes it too…I think).  The League of Utah Writers holds several conferences and events throughout the year. In their big Fall conference they hold a large writing contest for anyone who wants to participate.

There are a ton of categories to choose from including first chapter, whole book, short story, article, etc. I usually end up doing flash fiction because of time constraints. I can finish and polish a 1000 word or less story much faster than say, a novel.

My story “Mundane Chores” centered around a playful interaction of mother and young child. The mother is trying to fold laundry and the child is doing his very best to distract her from it. It’s not really a story, but rather a vignette meant to capture a moment of childhood and parenthood. Had I managed to make it a story with an inciting incident and clever ending I might have taken a higher prize than third place.

I’m not complaining. This was a piece I wrote in a car driving to Yellowstone with my family, which includes several young children. I’m ecstatic to take home anything.

Winning is a huge confidence boost. I hope to write and enter more contests in the future.