Skip to primary content
I had so much fun with last friday’s cosplayer feature with Robert Smith that I’m going to do it again, this time with Robert’s partner-in-costume Rachel Funk.
A
Growing up, Rachel watched all the classic sci-fi including Star Wars, Star Trek, Buck Rogers, and Battlestar Galactica. She loves reading anything, but has a special place in her heart for books with sci-fi elements, fantasy, and magic. Before she met Robert she only knew the basic comic book characters, thanks to him she knows them all much better. 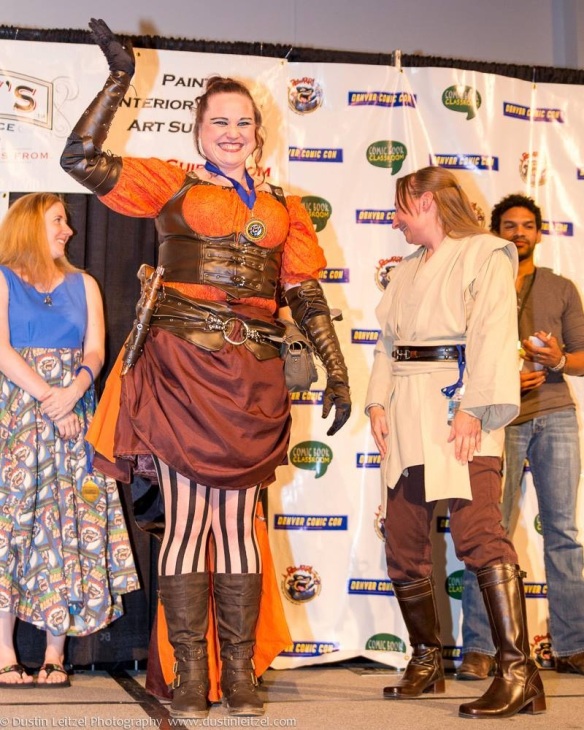 Winning the Special Judges Award for Craftsmanship, and crazy happy about it!

Rachel’s first comic con experience was attending the 2012 Las Vegas Comic Expo. She had no idea how many people dressed up for those type of events and went wearing a Wonder Woman t-shirt. In fact, at the time she hadn’t even heard of cosplay. Looking back, she wishes she had known because she has some mad skills when it comes to creating awesome stuff.
A
Since then Rachel has attended many events. Her most memorable cosplay experience is when she got to go up on stage in front of a huge crowd at the 2012 Denver Comic Con to receive the Special Judges Award for Craftsmanship for her Lady Mechanika costume.

Rachel recently finished creating a robe for Robert’s Teifling costume and is now working on a formal skirt for Lady Mechanika and bracers and a pop-up gun for Harly Quinn. With luck and a lot of work they should be ready for this September’s Salt Lake Comic Con. She also has sketches for a rockin’ steampunk Queen of Hearts and a steampunk Mad Hatter for Robert. She is also working on ideas for a wheelchair compatible steampunk Cheshire Cat. She hopes to have those ready by next year’s Salt Lake Comic Con.
A
When asked, Rachel shared that her secret dream cosplay would be a kick-ass Halle Berry style Catwoman.
A
Rachel’s biggest fangirl moment is when she got a photo-op with none other than Captain Mal, also known as Nathan Fillion. When he put his hand on her shoulder she totally freaked out.  She was like: OMG OMG he is touching me OMG OMG breathe! 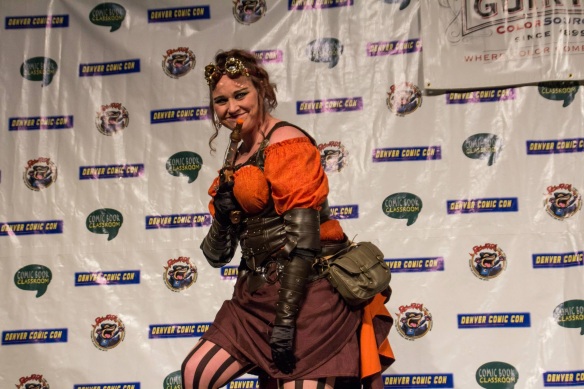 Quick, strike a pose! Check out how awesome this costume is!

For those who attend the cons, here is a special note to you from Rachel:

I wish more people would take the time to look at the costumes people put together. I am an attention whore. I love getting my picture taken and talking to people about my costume and who my character is. My problem is, my character is obscure, she is not from DC or Marvel. She does not have a big movie. Hardly anyone knows who she is…they just think I am a random steampunk girl. I don’t have a big or flashy prop. Bob has both of those things going for him (well-known character, with an interesting twist and a flashy, catch your eye prop) so everyone wants to get a pic of him or with him. No one wants pix with me

I’d like to thank Rachel for coming and being a part of my blog today. I had a lot of fun learning more about her and I hope you did too!
A
***
A
Attention fellow cosplayers, fantasy artists, and writers! If you want to be featured here like Rachel and Robert, and my guests in the past, drop me a line, I’d love to have you!