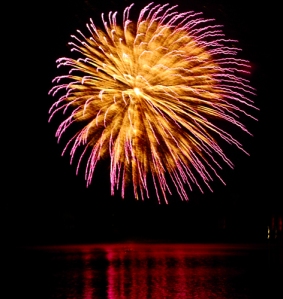 Alex had been gone on tour for over a year.  In their last phone call he told her that they’d finalized the plans for sending his troop home, next week.  Ever since he left last year on the 4th of July weekend she had imagined the celebration they would have when he returned for the next 4th of July.  Now he would miss it and the thought brought tears to her eyes.  Here in the park celebrating the holiday with her family felt empty without him.

For the past few months she had felt anxious about his homecoming. Absence was supposed to make the heart grow fonder, and when he first left it did.  She yearned for him, cried in her pillow at night for him, and found every waking thought returning to him. As the time of his absence stretched longer the memory of his touch began to fade as she found new ways to keep her mind occupied.  She threw herself into her work, got promoted and then threw herself into her new position.

Now, with his return so close she worried if she still had the same feelings for him.  Would his touch feel the same to her as before, or would a year of soldiering in the desert have changed it? Would she seen the same to him after all that time, or would she seem pale and ordinary compared to the people he had come to know and trust?

Still, here on the soft grass out under the warm night sky surrounded by family she wanted him back.  Holidays were meant for couples, having someone to hold hands with and lean on.  She watched as her sisters giggled with their spouses and wrangled their kids.  She couldn’t help but smile, one day that would be her as well.  She tried to hide how watching them made her heart hurt by laughing and smiling along, but she knew they knew.  Sisters always knew.  They had ways of finding out about secret pains and joys and things hidden under the bed.  They were there in the middle of the night with a kind word when the tears came.

Just as they always knew what was going on with her, she had a way of knowing what was going on with them as well.  And tonight they were hiding something.  She hoped that they hadn’t done anything foolish. Earlier that year, when the pain of his leaving was still too fresh, they had hired a stripper for her birthday party.  She still hadn’t fully forgiven them, but looking back it seemed much funnier now than it did then.

She prayed for something simple like a cake or a song.

As the dark fell and the first of the fireworks blossomed in the sky she felt a strange chill, like warm electricity coursing through her.  The hair on her arms stood straight up.  Then she smelled a familiar scent on the breeze, aftershave, his aftershave, mixed with his indescribable scent.  Her heart pounded in her chest, she didn’t dare turn around for fear that it might be someone else.

He didn’t say a word, but placed a hand on her shoulder.  She felt as if she couldn’t breathe, tears threatened to choke her.  He pulled her into his arms, and it was as if the world had stopped turning and they were at the center of the world.  All her worries disappeared, and in her heart there were fireworks big enough to drown out the cheers of the crowd.