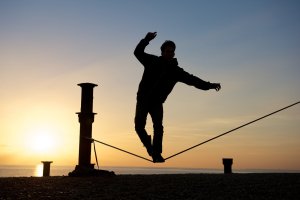 I can’t believe it, I’ve done it to myself again. I’ve been drawn in by an illusion and have become lost in a false sense of reality.  It’s a vicious cycle, I’ll start a new project or get a terrific idea and find myself obsessing over every detail and spending every last moment possible working and tweaking and fixing and whatnot.

Currently, I’m coming down from a brief obsessive cycle of trying to keep up with all the blogs I follow.  I want to read everything and comment on everything and be a presence in the blogging sphere. Problem is, I follow dozens of prolific blogs.  Reading and catching up with what everyone is doing takes a huge amount of time.

The obsession before that (which I’m a little ashamed to admit) was playing Sims.  My little digital people needed me to take care of them!  It took about two weeks to realize how pointless it was spending time playing a game that ultimately didn’t go anywhere.

Before that I learned everything I could about the use of essential oils.

Somewhere before that I spent endless hours attempting to create a following on Twitter.

Before that, while it was still cold and miserable around here, I fixated on what I would plant in my garden.

Earlier, I experimented with freelance writing jobs from text mills such as Textbroker and Copify.

Now I’m seeking balance.  I really want to finish writing this book, it’s been hanging over my head for way too long.  But, I also want to build up a strong fan base here using the blog and other social media.  I used to suffer from the delusion that all it took to become the next big thing was to publish a decent book.  After a few years of working the field, attending conferences, and rubbing elbows with other writers, I know that dream is like playing the lottery.  Sure, some people will strike it big right out the gate without all the hassle of building a fan base; but, the rest of us have to work to succeed.

When I started blogging back in 2010 I worked my tail off trying to get a post up every day and managed to do it for nearly a year.  I spent so much time on the blog that I didn’t realize that I was no longer working actively on my WIP, it was always in my mind but meeting my self-inflicted deadlines for the blog took priority.  Now, three years later, I know I don’t have time to post daily and still make progress on my book.  Three posts a week is still plenty.

I don’t nearly tweet as much as I should, but I do tweet the important stuff.  If I’m stuck somewhere with nothing better to do I’ll go over and interact with whoever is tweeting items of interest.

There’s Facebook in there as well. I’ll admit I prefer reading Facebook to Twitter because the things my friends post there are generally more interesting.  While I’m not nearly as active on my author page as I should be, I’m ok with it.

It’s important to have priorities or the things that matter most don’t get done.  My writing priorities start with working on the book, then blogging, then everything else.  That is, until the next obsession rolls around…