It’s FanX weekend and the streets of downtown Salt Lake have transformed from uptight and respectable to downright weird. This season’s characters are heavily from the Marvel universe. Everywhere you look there’s a Gamora or Peter Quill. Dozens of Tenth Doctor are mixed in with a healthy assortment of stormtroopers wander through the food courts.

In 2015 you would find me wandering the con as a snooty General Kala accompanying the fabulous Emperor Ming. Probably one of our most ambitions costumes of all time. We spent many weekends sewing and piecing together the intricate designs. We even entered the costume contest and were invited to the stage show as finalists in the group division. By the way, if you haven’t watched the 1980 Flash Gordon, you’re missing out.

In 2016, we took out cosplay in a different direction and tried out large-scale puppetry, with a Miyazaki character affectionately known as No Face. The perk of a puppet is that hubby and I could trade who wore the puppet and who acted as the handler to make sure No Face didn’t accidentally walk into a wall or trip on anything on the floor. We designed him to grow, so at random he’d jump up to over 12 feet tall and startle anyone we happened to be nearby. He could also shrink down to about 3 feet and interact with kids. 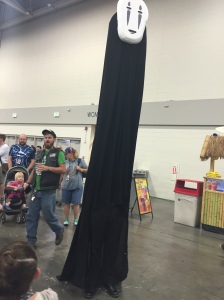 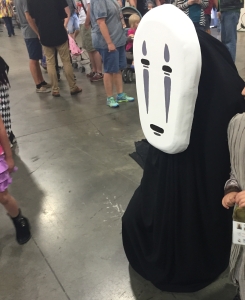 This year we will be bringing No Face again on Friday only as he is a crowd favorite. We would have loved creating a new costume but this year has been super crazy with the kids getting older, huge projects coming to fruition, and, well, life.

If you are at FanX this weekend, give a shout out in the comments. Even better, if you are cosplaying this weekend, tell me all about it! I’d love to hear what your favorite characters are.

We finalized the cover for my book this week, stay tuned for the big reveal!